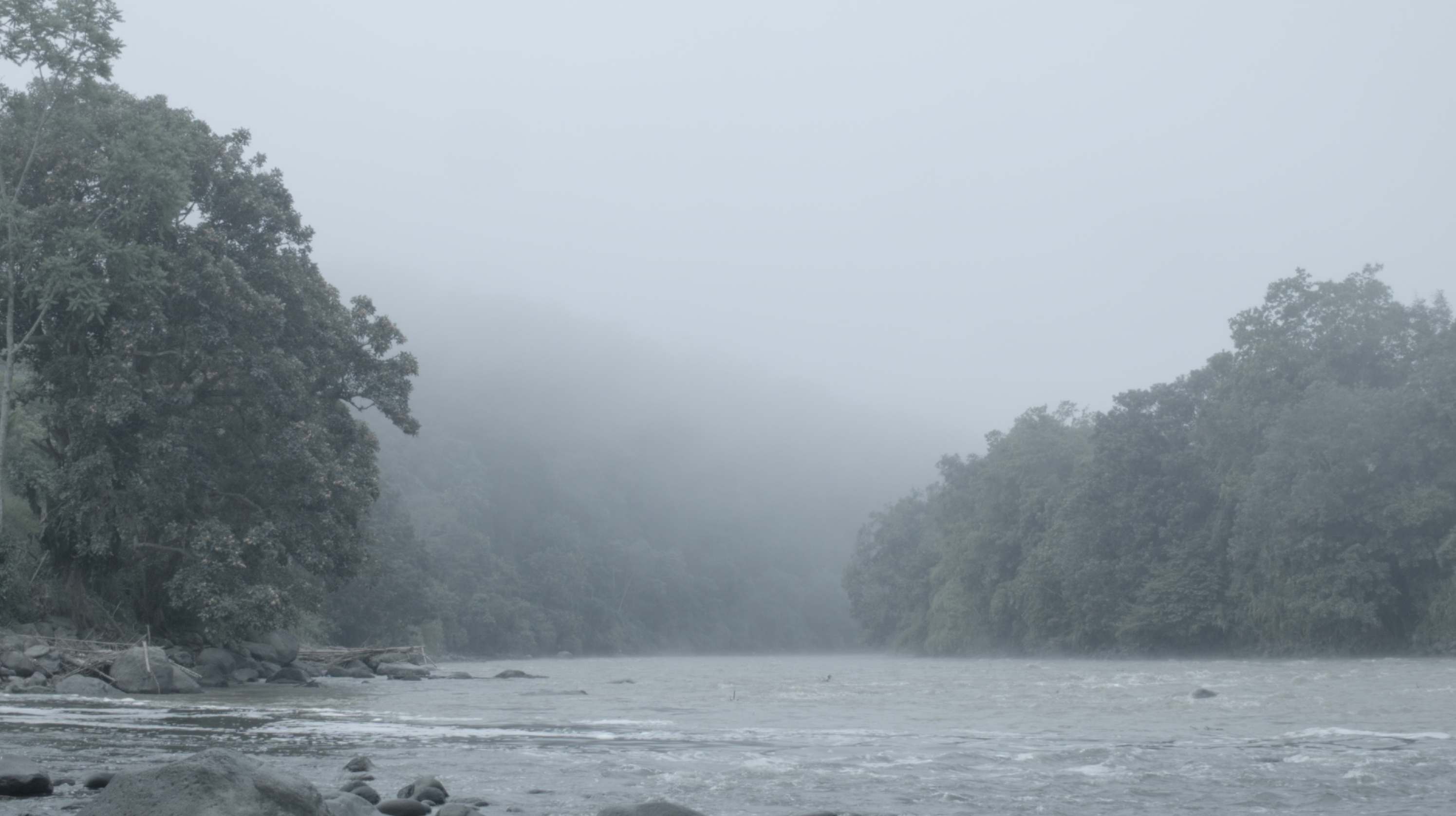 From the river to the mountain (and backwards):

Forced Disappearance and Ecologies of Recomposing in Colombia

1. Children drawing of the Cauca river

2. Collecting of clay in the Meta river

3. Extracting dragging material of a river 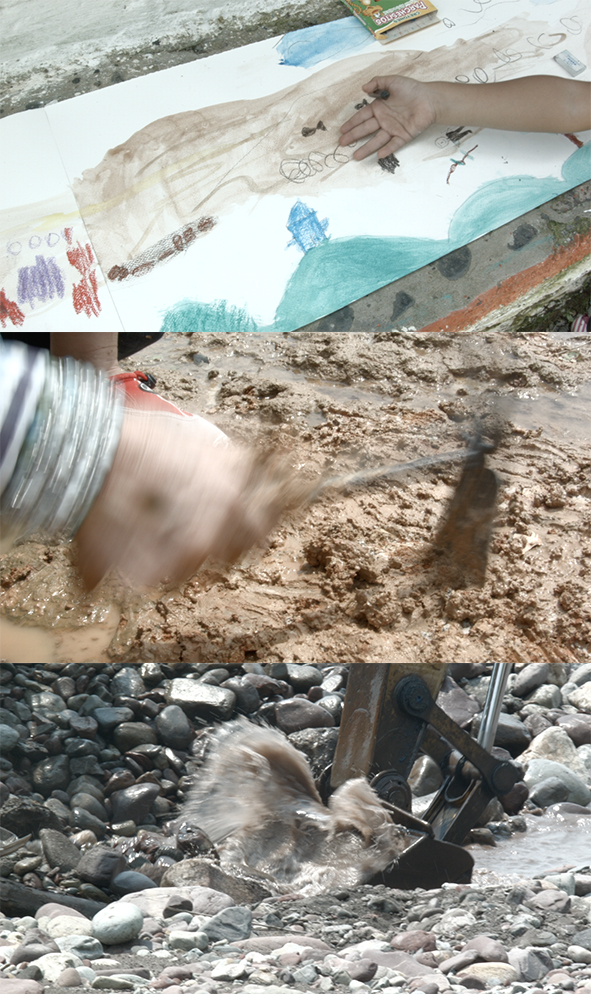 In Colombia, rivers have had a central role in the use and circulation of violence, explicitly in the case of forced disappearance of people. Likewise, those dwelling on the riversides, live alongside the strength of the water and all that flows and transforms in it. In Risaralda, on the western side of the country, a backwater in one of the banks of the Cauca River is where the children find their shoes and toys, but also, is where animals, tree trunks, garbage, and waste from agricultural and mining industries, get trapped. So as the hundreds of bodies of people, that after being killed were thrown into this river. In Medellin, young people from peripheral districts have faced the abrupt transformation of space and their lives. In San Javier neighborhood, the slope of one of the surrounding mountains, long used as a quarry and garbage dump, and still as a debris landfill, has also been the assigned place where the bodies of disappeared persons were thrown and buried during military interventions and armed confrontations. In the southeast of the country, the development of infrastructure and the accelerated extractivist industrialization have transformed meadows, flooded forests, as well as the banks and riverbeds. In this region, a woman walks, searches, and imagines the places where her disappeared son could have been buried.

In Colombia, rivers have had a central role in the use and circulation of violence, explicitly in the case of forced disappearance of people.

In this context, rivers, debris landfills, quarries, and cemeteries, configure complex geographies in which bodies of disappeared persons, communities that live there or walkthrough, and diverse extractives practices, are tightly related. An ecology, as deeply material as it is symbolic, in which what was decomposed and transformed into waste, gives way to hybrid forms of resisting and recomposing life and death.

From an ad-hoc methodological approach assembling art as social practice, collective creation, and multisite and speculative ethnography, I explore how these communities (not merely social) rebuild and give new meanings to the bodies, the space, and the reality that was affected. Likewise, I seek into the ways of dealing with material and symbolic burdens –that enable resistance and agency processes, and the creation of other futures and new forms of living–, and how they are at risk of being radically transformed and disappeared.

"I seek into the ways of dealing with material and symbolic burdens, that enable resistance and agency processes, and the creation of other futures and new forms of living"

Children in the old rail ways in Risaralda (2019) 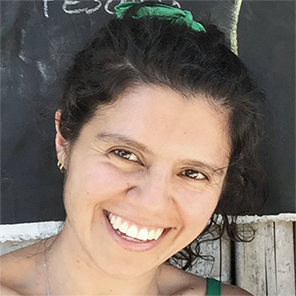 As a visual artist, I have developed my practice through a multi-disciplinary frame bringing together art, critical and critical, speculative, and ethnographic methodologies, in the searching of broadening and enriching the ways of doing social commited research-processes.

During the last years, I have been exploring the ways people deal with everyday life, and their alternative forms of re-imagining the past and the future, in the frame of ongoing violence such as forced disappearance of people in Colombia.

Currently, I am a doctoral candidate at the University of Zurich, Doktoratsprogramm: «Methoden und Perspektiven», as well as I am part of the program «Epistemologien ästhetischer Praktiken» (UZH/ZHdK/Collegium Helveticum). 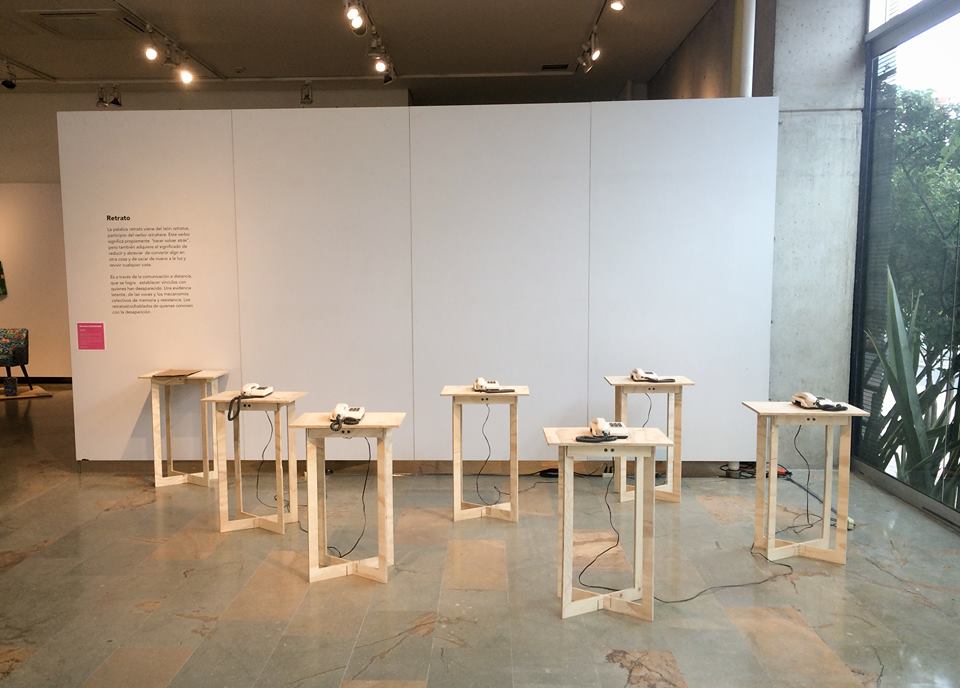